As cities continue to grow so does their thirst for water and the need to look beyond to alternative or new sources of water.  Rising demand is often partially satisfied through groundwater mining or a heavy dependence on groundwater pumping.  When pumping becomes unsustainable or there are imposed regulatory restrictions, water transfers may be necessary for sustained growth and economic productivity.

With a significant portion of Arizona’s surface freshwater coming from the Colorado River (about 40% of total surface water withdraws; 2.8 million Acre-Feet/Year) the notion of transferring water as a long-term- strategy should raise concerns.  A 2017 study published by the USGS finds the river’s flow has diminished by about seven percent over the past 30-years due to rising temperatures and increased evaporative loss—among other factors.  To put this departure into context, this magnitude of decrease in Upper Colorado River Basin (UCRB) flow is approximately 24% of the allotment of UCRB flow to California, or 38% of the allotment to Arizona, or 353% of the allotment of UCRB flow to Nevada.

This article highlights two recent water transfers in various stages of completion.  Both aim to transfer water rights from rural western Arizona to the rapidly growing tri-county CAWCD.  The transfer destination is relevant—Arizona’s three largest cities, Phoenix, Tucson, and Mesa are all located in this region.

We take a snapshot look at the funding mechanisms behind the transfers and discuss some observations and challenges facing water market activity.

The Central Arizona Water Conservation District (CAWCD) Board of Directors has approved a 25-year renewable lease agreement to secure additional Colorado River water from the Town of Quartzsite.  Under the proposed agreement, CAWCD will lease the town’s 1,070 Acre-Feet/year 4th Priority Colorado River entitlement. Entitlement is another way of saying that there is a vested right to appropriate water of a given quantity, from a location for a beneficial use.

The water entitlement has not been used in the past due to high costs associated with constructing a pipeline that would need to span 20 miles to get water to where it’s needed. The deal will be structured this way—the CAWCD will make a one-time lease agreement payment of $30,000 and, during the initial term, will pay $1,700/AF. 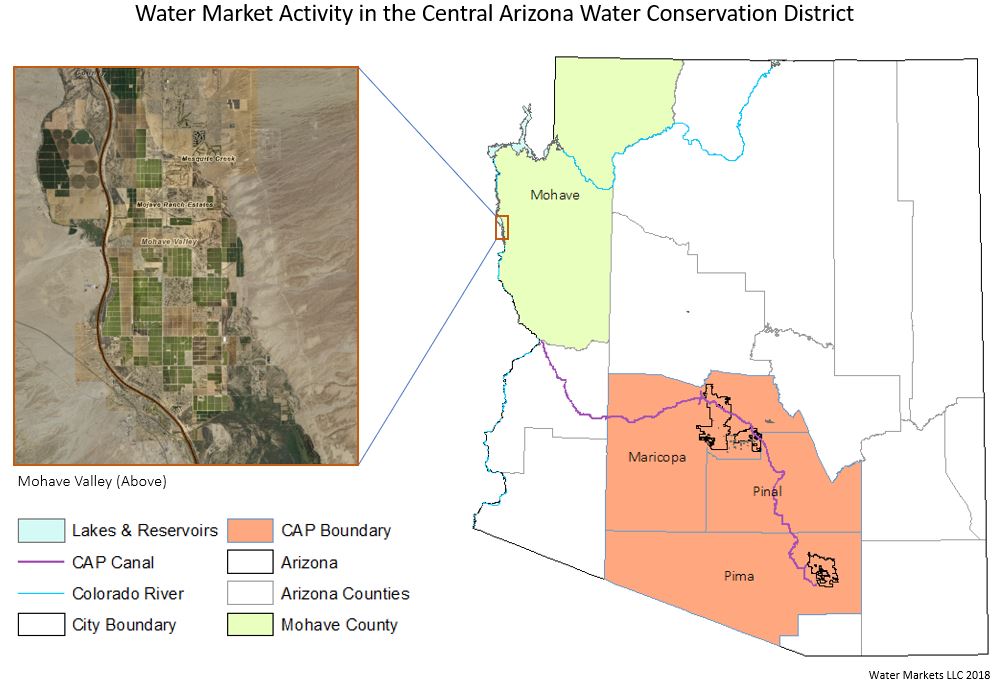 During the extension period, the price could increase to $2,470 Acre-Feet. The agreement must be approved by the Secretary of the Interior as part of the Bureau of Reclamation’s approval of the agreement.

The CAWCD was created in 1971 pursuant to state law to provide a means for Arizona to repay the federal government for the reimbursable costs of construction of the Central Arizona Project (CAP) and to manage, operate and maintain CAP.  Over time as water infrastructure, allocation and governance challenges change so have the statutory authorities and responsibilities of CAWCD.  A component of those authorities and responsibilities now includes the management of strategic and other reserves—hence sourcing additional water.

The CAWD covers a populated tri-county (Maricopa, Pinal, and Pima) in the southern region of the state and includes Phoenix, Tucson and Mesa.

The Mohave Valley Irrigation and Drainage District (MVIDD) is set to purchase land and water from Water Asset Management LLC and Water Property Investor LP. The package is comprised of seven farms totaling 2,2023 and 13,929 Acre-Feet of Colorado River diversion rights.  Of the approximate 14,000 Acre-Feet, roughly 82% by volume are 4th Priority rights under subcontracts with MVIDD, while the remaining 18% are considered perfected rights.  Total cost is $34 million dollars.

As of March 6, the Mohave County Supervisors voted unanimously to approve $20,000 to file for court standing in opposition to the deal expressing concerns over asset stripping (water being removed from the county in this instance) their ability to provide for future needs.

According to a recent article in the Daily Miner the property transaction is currently in the due diligence period, which includes discussing the development of a rotational fallowing program with MVIDD, extending farm leases and reviewing the title report. Closing is contingent upon MVIDD approving the agreement.

Where Does the Funding Come From?

The funding for both market transfers will come from the Central Arizona Groundwater Replenishment District’s Water Rights and Infrastructure Account Reserves (CAGRD). The CAGRD Water Rights & Infrastructure Reserves, is governed by ARS §48‐3772(7)(d) and ARS §48‐3779(H) and includes both Committed and Restricted Funds and carried a $48 million dollar balance as of June 2017.  If you are still confused as to what exactly CAGRD does, here is the simple answer– the division of CAWCD that carries out the district’s groundwater replenishment authorities.

The real estate – water – nexus affects the timing and revenue of water supply projects. For CAWCD the housing market directly impacts the utility’s ability to generate revenue.  This revenue is important not only to carry out day-to-day activities but also to augment reserves that ultimately partially fund the CAGRD and its mission to build, operate and maintain underground storage projects.

There are several interesting things worth noting about these two water market transactions. Foremost they underscore some of the truisms and challenges of water markets in the western US.  Water scarcity in the arid and semi-arid southwest is being exacerbated by population growth, rising temperatures and heavy reliance on groundwater. Water rights are typically transferred from rural and agricultural areas to metropolitan areas that are more densely populated.

Both transactions employ creative financing using complex institutional arrangements. Many transactions involve state or federal authorities either as direct purchasers or as regulators of transactions among other users. Water transactions are complicated and include jurisdictional externalities, including transactions costs, which are not considered into the price of water.

Water prices are localized.  When examining these two transactions the going price of Colorado River surface water diversions per acre-feet is $1700- $2440 regardless of priority status (perfected – 4th priority) with anticipated increases.

The Mohave Valley transfer highlights the fact that institutional investors are purchasing farmland as a water rights investment strategy—farmland with onsite access to water has demonstrated strong annual returns.

Public-Private Partnerships is a concern of rural communities because it brings up fears of the private sector asset stripping. In other words, strategic water resources planning and management of one geographic area may be at odds with the future needs and economic activity where the water is being transferred from. Some water transfers may be beneficial to rural communities. The Quartzsite water market transaction appears to provide the town with a path forward to generate additional revenue to improve water infrastructure including its distribution system and to address other needs. What’s still unknown are the long-term effects versus the short-term financial gains.